The start begins about one hundred metres left from the gate with short zigzags up from the road: there are red painted marks on the rocks. The surface is loose in parts, but easy to follow as it wends slowly along and up the mountain slope: the track was cleared recently so there are still cut off branches to mark the trail. There is shade here too as it snakes through mountain scrub and low trees and also narrow side trails made by roaming goats, usually heading up or down at right angles to the track.

The further you go, the more the views open up to the west and the south: long and overlapping vistas of green mountain ranges with red roofed, scattered villages in improbable locations. Dark ribbons of new tarmac appear then disappear as they snake up and down and through the mountains; connecting these remote villages with the outside world – how it must have been before the motor car?

The Lousios Gorge below is largely hidden within its steep folds, but grey limestone cliffs streaked with black, mark the far edges of the gorge. You will see the Monastery of Philosophou perched in isolation on the edge of a cliff, reached by an ancient footpath or monopati from the River Lousios below.

Further to the left, if you look carefully or have binoculars, you can just spot the lines of the ancient walls of Gortys at the top of a lone green grassed area.
To the south on the plain, the twin smoke stacks of the lignite power stations belch out their smoke rather too near the sprawling city of Megalopolis.

The trail contours on, onto a more open landscape with less shade and there are views of Dhimitsana ahead, sat overlooking the Gorge, but soon the trail enters woodlands, shaded glades and small meadows. It is around here you will spot goat sheds and feeding troughs then a wide track used by shepherds to bring water for their animals. This track will lead you down in a series of easy switchbacks, downhill till you reach the small, recently restored chapel of Agios Dimitrios.

From here a tarmac surface leads down the main road and a choice: go back the way you came with the same views from a different angle or a slow, gentle, uphill ramble back along the road? This has its pluses: you don’t have to watch your feet and you get a closer view down to the Gorge. If it is late in the day there is the chance to watch the sun go down over the mountains from Nena’s viewpoint at “Aeraki”! With this option you might even hitch a lift from a passing car or see a bus going you way?

Everybody likes a good deal. Enjoy the satisfaction of getting the lowest rate by booking directly with us. 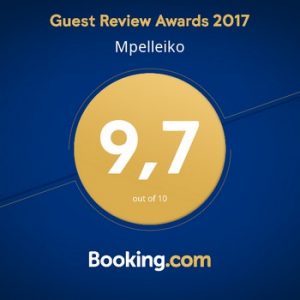 10 great B&B and guesthouse hosts around the world